skip to main | skip to sidebar

We love football season. Fall is one of my favorite seasons, and BYU football is part of the reason. : ) The cougars are doing great this year, 4 wins and the last two games have been shut-outs. GO COUGARS! I'll have to get Benjamin doing the cougar fight song on video and post it on the blog.

We went a week ago to a Purdue/University of Oregon football game with Janeece and Dusty and Ritch and Lindsay Perry. That was an exciting game, Purdue lost in double overtime! We had a fun time seeing some of the Purdue football game traditions--there are a lot of train whistle noises. We're the Purdue Boilermakers--Boiler up! The marching band performed at halftime with the "World's Largest Drum!" Well, on Friday night we just happened to be driving by a parking lot where the drum was in the back of a truck. We pulled over and got a picture with the drum and talked to the band members. It weighs 500 pounds in it's carriage and 6 guys handle it during performances. WOW! They said it really is the world's largest drum. Maybe so. Guess we need to check the Guiness Book of World Records. Anyway, here's a picture: 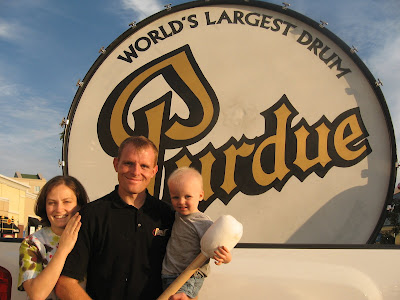 Wow, I'm so glad you were able to get a picture with the drum! Plus I'm glad your temple trip went well. 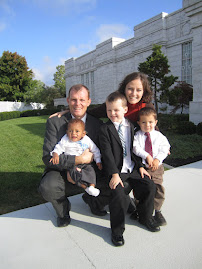